Why I Am a Socialist 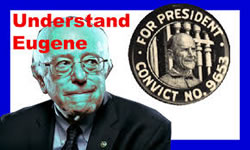 Before I get too far into this, I want to mention the names of two persons who have greatly influenced my thinking on this and other subjects over the years, Emma Goldman and Eugene V. Debs. If you aren’t familiar with their lives, please take the time to check them out. For Goldman, I recommend Vivian Gornick’s biography and for Debs, The Bending Cross by Ray Ginger. You can thank me later.

I am a Socialist because, first and foremost, I despise Capitalism. Capitalism is the antithesis of everything I believe in. It is a Petri Dish for poverty, racism, sexism and any other form of divisive thought one can think of. To say it is also the primary cause of wars is to state the obvious. It is a system that pits one person against another and in so doing allows those with money and power within society to maintain and increase both, more times than not,  to the detriment of others. In sum, Capitalism is a disease upon the body politic and Socialism is a cure.

Socialism is about building from the bottom up. It eliminates acquisition and profit as the primary goals of an individual and instead emphasizes equality, fraternity and community. The guiding principles of Socialism are simple and straight forward. Among them are three that I consider of major importance:

But this  is not intended to be a treatise on or a defense of Socialism but rather an explanation of why I espouse that philosophy.  To me it’s personal. Let me explain.

The West Bottoms of Kansas City was home to the stock yards and packing houses as well as the railroad yards. These were the employers of my neighborhood and after I returned home from the Navy, my source of livelihood.

These industries demanded one hell of a lot from their workers and gave very little in return. Like everything else in this country if you are a working person wanting change of any kind, say a higher hourly wage or a union shop, you have to take action. It will never be given to you. Hence the packinghouse strikes of the 1940’s.

The worst thing you could be called in my old neighborhood was a Scab. A strikebreaker was beyond contempt. If you crossed a picket line, you couldn’t continue to live in Argentine. You literally could not live. You would be killed. I remember the night my Dad, who was a warehouse foreman, received a call from the wife of one of the dock workers who had crossed a picket line that morning. He hadn’t returned home and she was worried. Dad knew the man, knew he rode a bicycle to work and knew his path home. He retraced the route and found the man nearly beaten to death in an alley near his home. Had it not been for my father’s action he would have died.

I recall trucks being turned over and set afire in the streets near my home. The cops were no help whatsoever. In fact, then as now, more times than not they were part of the problem. In 1948 the KCK police broke up the strike headquarters of the CIO and injured over 100 persons, including a number of wives of strikers working in a soup kitchen. You don’t forget that. Not when you are a twelve year boy. I should point out that I didn’t just witness this life as a youth; I lived it as a man. After returning from the Navy, I worked on the Killing floor at Cudahhay Packing in the yards. You worked a shift where in the morning you came in and on a small chalk board you would see: 7 ½---112. That translated into once this shift slaughters and dresses out 112 head of cattle you will be paid for 7 ½ hours of labor. This meant that if you finished in 6 ½ or 7 hours, you were still paid for 7 ½. So speed was encouraged.

Now the Packing house floor was home to the assembly line long before Henry Ford. The way it worked, a steer would be strung up by its hind quarters to a conveyor belt, killed by a blow to the head from an air pressure gun, gutted and then moved around the room where men would cut and carve out the various cuts till only the empty carcass remained. The final step was the detachment and disposal of same. But it was the first step that involved me.

As the animal was killed, it was gutted and its entrails dumped into a large aluminum wheel barrow. Two pieces of those guts (I don’t remember what..) were placed on a tray attached to the handle. The wheel barrow “engineer”, (a term I just coined…) then proceeded around the killing floor dispatching the two tray pieces at two different stations and then taking the entrails to the loading dock where they were dumped into a waiting truck. The wheelbarrow was then rinsed out and the whole process repeated one hundred and twelve times. I was the guy on the business end of that wheelbarrow. Hands down, the absolute worst job I ever had.

One of my co-workers gave me one of the best pieces of advice I have ever received my first day on the job. I was sitting outside on the dock at lunch drinking a red pop, way too exhausted to eat anything. This slender, older black guy walked past me and without so much as a glance in my direction said “You can give out, white boy, but you can’t give up.” (I was the only white guy on the killing floor.) That was in the 1950s and I remember it as though it were yesterday.

It was also in the ‘50s that the packing houses began to exodus the Bottoms. Their rational for their exit? The union workers were too tough in their demands and negotiation tactics. It makes me smile to think of that.

I will close with a quote from Eugene V. Debs that exactly speaks to my beliefs: