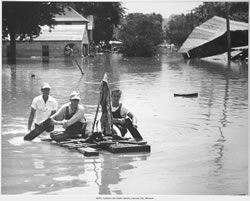 The 1951 flood in Kansas City has been referred to by some as that city’s biblical disaster. Published accounts show that the rain fell for forty days. To the north and west of the city, it was closer to ninety days. Over much of the Kaw River basin, the rainfall from May 1 to July 31 exceeded the amount usually seen in an entire year. On Friday, July 13, all that water converged on the Armordale-Argentine section of Kansas City, Kansas.

My friend Red Smith and I had spent that day helping my dad load trucks. My father was a warehouse foreman who worked the loading docks at the Caterpillar Parts Depot in Armordale. We were helping him and other workers in an effort to save as much as possible from what we knew was coming. We were two fifteen year olds who enjoyed the opportunity to work shoulder to shoulder with the tough talking, cold eyed dock workers.  Little did we know that within a matter of hours, all of our lives would be changed forever?

The depot was just north of the Twelfth Street Bridge that divided Armordale from Argentine. Both communities were referred to as the bottoms. As we loaded machinery and office furniture onto the trucks, we could see people and cars moving in a steady stream south across the bridge into Argentine. Their exodus was accompanied by the sound of sirens we knew to be the signal to evacuate. This did not cause us too much concern because the Army Corps of Engineers had been saying for days that sandbagging crews could keep ahead of the flood by building the dikes higher along both sides of the river. My friends and I had helped in that effort earlier in the week. “I think that we can beat it by about six inches. The river is rising slowly.” said Col. R. P. West, acting division engineer at the time. Col. West was wrong.

As darkness descended, it was decided that Red and I should leave. Red was to drop me off at home. I was to tell my mother that she should call some friends of our family who lived “up the hill” and see if she could stay with them that evening. The plan was for my father and me to work through the night in our home moving what we could to the second floor of the house where we had an apartment. Our apartment was on the first floor and the upstairs apartment was vacant.

Red and I were convinced that if the water were to overflow the dike, it would be on the Armordale side. We talked about this as we drove home. There was a rumor that the Army Corps of Engineers was going to dynamite the levee on that side so as to save Argentine. We wondered if we would be able to hear the sound if they did. It was all very exciting. We had just put in a days work with men who would not normally give us the time of day. In our community, physical labor was something that was honored and respected. Shop keepers, grocers and other white collars types were also respected and understood to be an important part of the community but our heroes were those men who worked on the docks, the packinghouses and the railroad. The worst thing you could call someone in Argentine was a scab. You cashed your paycheck at Rich’s Bar, brought the money home to the wife and spent Saturday night at the Park theatre watching a double feature. One was always a cowboy movie, the second usually a mystery. In addition, there was a serial and a cartoon ( sometimes two!) and all of this for twenty-five cents. The Park theatre would not survive the night. Red dropped me off at home and we agreed to meet the next day.

Our house was on 30th Street, a block off of Strong Avenue. Strong Avenue was the main street of Argentine. It was home not only to the Park, as we called it, but also to those businesses that kept us fed, clothed and informed. The local grocery store where Gilbert Paris was the butcher was at 34th and Strong. Gilbert’s son Ronnie has recently lost his life in Korea. Gold’s Department store was located on Strong Avenue as was the Wyandotte County Record. The Record was the weekly paper for the community. From 12th Street in the East end to 42nd Street in the West and from the river and Santa Fe Railroad tracks on the North to Metropolitan Avenue on the South, Argentine was in many ways a self contained community and the only home I had ever known.

I explained to mother what dad had requested and she immediately called our friends who insisted that she come up at once. I remember her worrying about what she should take with her. She packed a few toilet articles in a small case and wondered aloud whether or not she should take her crochet work. We decided that it would be just fine and that she could work on it tomorrow when she returned. With that, we were out the door.

By the time I returned from walking my Mom up the hill, a number of men had gathered in front of the Ben Hur Masonic Temple. The Temple was on 30th street at the south end of our block and on higher ground than the houses surrounding it. I saw that my father was in the group. I joined him and asked what was going on. He said that Argentine was being evacuated in addition to Armordale and that we would go home, move a few things to the second floor and then call it a night. We began walking down the street toward our apartment. It was close to midnight.

When I think back to that night now, the image in my mind is of lights reflecting on water. We had reached our front step and dad was unlocking the door when he glanced down the street in the direction of Strong Avenue.

“Son, what is that I see?” he asked. I looked in the direction he was pointing and saw lights moving in arcs toward us, down the street and in the yards on either side.

“No, son. In front of the lights. Look where they’re shining”

AS we ran back up the street toward the Masonic Temple, the men gathered there began to shout to us “Look! She’s busted through! Hurry!”

The river had indeed “busted through.” Shortly before midnight, the Kaw River rolled over the dike protecting Argentine. The lights reflecting on the water were flashlights and lanterns being carried by firemen, police and volunteers recruited along the way to move everyone to higher ground. The water was rising so fast that by the time we joined the group at the Temple, our front yard was underwater. For the next five hours, we watched the water take everything my father had worked a lifetime to acquire.

The same was true for most, if not all, of the men gathered on the slope of the hill. Throughout the night other men would join our group. A few wandered off into the night. They left without saying a word. Those that joined us did so in silence. There was no traffic so we sat in the street. A local minister walked among the men. He would stop and place a hand on the shoulder of someone that he knew and offer what he hoped, I’m sure, were words of comfort. He approached one man from behind, placed his hand on his shoulder and said “Brother, this is God’s will.” The man spun around, faced the Reverend and said “Preacher, I’ve been a Christian for sixty three years and I will never, ever set foot in another church as long as I live. If this is the way that God works, well, I don’t want any part of it. Not now, not ever!” A few of the men close enough to hear the exchange laughed. The minister walked away and I never saw him again.

By daybreak, there were perhaps thirty to forty men remaining. What we saw, we would never forget. As the light increased, we could see just how high the water had risen. Our home was under fifteen feet of black water. It was difficult to accept what we saw. Where once there was a tree lined street with picket fences and rose bushes, there was now nothing but roof tops and river water. I turned and looked at my father.

He sat with his arms circling his knees, staring straight ahead. He had yet to say a word. I was afraid to speak. I did not know what was expected of me at a time like this. Nothing in my preceding fifteen years had prepared me for this moment. I returned my gaze to the scene before me and thought about my Dad.

My father was born in Arkansas, one of nine children. His father was an overseer on a delta plantation outside the town of Lonoke. Life was hard, opportunities few and after attending the fifth grade, he was told by my grandfather that he was needed at home. That ended his formal education.

He worked in the cotton, rice and soybean fields until World War I when he joined the army. When the war to end all wars was over, he came back to Arkansas for a while and then road the rails to the West Texas oil fields where he found work as a rough neck. After a few years in the oil patch, he followed the wheat harvest north to Kansas where he met and fell in love with a farm girl that he later married. That farm girl was to become my mother.

Throughout his life he maintained an interest in politics but never would disclose whom he voted for. He considered the secret ballot one of the cornerstones of a democracy. A reader of two daily newspapers, he kept up with current events. He could give a detailed explanation of the Taft-Hartley Labor act and why it was superior to the Wagner Act that preceded it. A boxer at one time in his life, he loved the fight game and was something of an expert on the sweet science. I never once heard him discuss religion. We did not attend church and while there was always a tree and gifts on Christmas morning, no other religious holidays were observed. There was a bible in our home, but I don’t recall anyone ever picking it up and reading from it. I have often wondered what my father thought about that night. I have wondered if he prayed. I will never know the answer to that question. What I do know is that sometime during that night he made a decision. He made a choice. That choice will always be what I think about when someone asks me what it means to be a man.

When my father finally spoke, it was in a firm, quiet voice. Still looking straight ahead, he said “Well, son, let’s go on up the hill and get some sleep. When we get up, we have a lot of work to do.” With that he turned and proceeded up the hill to the house where my mother had spent the night. He never spoke of that night again.