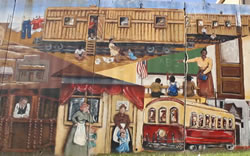 My ‘Ah ha!’ moment about the vital role community plays in our lives occurred while reading Marilynn Robinson. Please God that I may one day write a sentence as beautiful and true as this:

"Any human face is a claim on you, because you can't help but understand the singularity of it, the courage and loneliness of it”

Why start a post on the importance of community with the above quote? Because to be an individual is to be lonely and just to get through most days requires tremendous courage on our part. We are singular cradle to grave. Without community we would not survive that journey. That is a given. But it is equally true that in community we find our purpose and identity. It is in the neighborhoods of our youth that our initial values and beliefs are formed. Let me introduce you to my formative chrysalis, Argentine.

I grew up in the West Bottoms of Kansas City, Kansas in the Argentine district, so named because of the location of an old silver smelter. It was a kind of an industrial Shangri La, isolated and not easily assessable. Few had occasion to go to Argentine unless you either worked or lived there.
Argentine to me was bounded by 42nd street on the west, 12th street on the east, the top of the hill to the south and the Kaw River to the North. When I say the top of the hill, you need to understand that Argentine lay in a valley, the Bottoms. It was a valley of trees and streets, of alleys and the occasional vacant lot. These vacant lots were always welcomed. It was here that we played baseball, football and a wonderful game called “Hide the Paddle.”

Hide the Paddle was played in a vacant lot on 12th street. First, someone would hide the paddle. The paddle could be anything that one kid could hit another kid with: a board, a length of garden hose, anything. The rules were simple. One person hid the paddle on one side of the vacant lot, the side bordered by the alley. Alleys are great places to hide things. If you grew up where there are no alleys, I feel sorry for you. Alleys test your courage, your self reliance and your ability to handle unexpected situations such as running into some kid that you have only seen on occasion and those occasions were when he was beating the daylight out of some other kid. Anyway, back to the game.

Once the paddle was found, the finder got to hit any and all of the players until they had safely reached the other side of the vacant lot. There were usually at least a dozen or so kids playing. In age they ranged from grade schoolers to high school kids and beyond. I loved the game because it gave me a chance to run and laugh and be part of the action. Anytime I could be part of a group that included Bob Boring, the Larson boys and one or more of the other big kids around 12th street, I was one happy camper. I never found the paddle but I did find great delight in running back and forth across that uneven patch of dirt just south of the 12th street Bridge.

Sometime we played football in that lot. I remember the time that Jimmy Overly came down to play. Down because Overly lived up on top the hill.

Where I am not certain because the only time I went up the hill was to play basketball at Lee Green’s or Larry Haflick’s.

Well, when Jimmy Overly came down, he was in pads! Real football gear! Was he ever a marked man! The only way most of us would ever wear pads was to play for the high school team. To spend money on athletic gear was unheard of. If you had sports equipment, it was because you played on a team. No one else would presume to wear gear you hadn’t earned by making the team. Hell, if a fellow wore his baseball cap backwards, it meant he was a catcher. If he had a KU sweater or jacket, he played for the University. In other words, you earned what you wore. The community value instilled here was simple: Respect must be earned by accomplishment and that requires talent and effort. It can’t be purchased.

Another core belief of mine formed in the West Bottoms is that Labor as a moral and political force has enormous power when properly harnessed and directed. In 1954, the year I graduated from high school, one in three private sector jobs was a union job. Today that number is less than seven percent. Yes, the labor force has changed as has the private sector but the moral and political high ground can and must be reclaimed. The lesson learned here is that the individual laborer remains the bedrock of any community.

The above examples serve to point out the role of community in the formation of our ideas and values; community as scaffolding for our character development if you will. But I want to end this entry on a cautionary note. We must always check the community mores against our own. We alone are the sole determiner of our actions and beliefs. Community is a great and mighty aid in our development but must never be used as an excuse for our behavior. As is so often the case, Emerson said it best: “To be yourself in a world that is constantly trying to make you something else is the greatest accomplishment.’