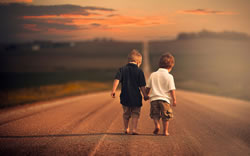 If there isn’t a jazz tune by that name, there should be. I would buy it and play it from time to time. I would play it on summer nights and Sunday mornings for Bobby. Before I get too far into this, you need to understand that the Bobby I am writing about was one of the Bottom Boys of days gone by. Bygone days, the old folks used to say. Well, now that I’m one of the old folks, I guess I can say it too.

I read somewhere that in some cultures, Mexico comes to mind, a person dies three deaths: First when the heart stops beating, second when you’re buried and finally and most importantly I think, when you are no longer in the memory of those who still walk the earth. I have no intention of letting that happen when it comes to the Bottom Boys, especially Bobby. Here’s why.

Robert Carl Larson and I first met seventy years ago in the summer before the fifth grade. My Mom and Dad and I had moved from an apartment on 34th street to a basement apartment on Metropolitan Avenue and 20th street. Don’t ask. I do not know the answer. I never understood the rational for any of my family’s moves. The only thing that matters here is the fact that Bobby lived on Ruby Avenue at 12th street.

I set out to explore my new neighborhood on my brand new, second hand Ward Hawthorne bike. I traveled down Metropolitan toward the bridge at twelfth street, turned right on 12th up a block to Ruby and when I turned the corner, there sitting on the steps to Bob’s house, was Bobby and a half dozen kids all older than he; twelfth street kids.

I was, by definition, now a 20th street kid. Big difference. I could have continued on but that would have been seen as an act of cowardice. Plus I knew that at least some of the boys sitting on those steps were ones that I would be in school with come the fall. I had no choice. I rode over to the steps and stopped.

“Who the fuck are you?” That from a young acned faced teen named Junior who would be dead in five years, killed on some frozen hillside in Korea.

“You don’t live around here.” This statement from a boy dressed in overalls with no shirt, Donald Need. No menace in his tone.

“Yeah, and take his bike!” said a boy dressed in a white tee shirt and jeans. He laughed as he said it and seemed to be making fun of Junior’s remark.

I had no idea who Bobby was. I just knew that I would probably be in a fight that I wanted no part of and would no doubt lose. I waited for someone on the steps to stand up. I knew that would be Bobby and that was the one I would be forced to deal with.

That was one thing about the Bottoms. You never had to worry about being ganged up on. Fights were one on one, at least in the summer of 1946.

From the first step, a boy stood up. Smaller than the others but with a certainty of movement that many athletes possess, he took a step toward me and in so doing separated himself from the others. Now in the street with his back to the steps, he looked me in the eye and asked “Where do you live?”

“Dow on Metropolitan at 20th street.” I replied. “We just moved there. I guess I’ll be going to Franklin.”

“Me too.” Bobby hesitated for a moment and then, turning his head toward the steps, added laughing “Don’t worry. These guys are all assholes!” There was an eruption from the steps as all assembled rushed for Bobby. He was off running down the street toward a vacant lot on the other side of twelfth. They ran past me without as much as a backward glance. When I realized that they weren’t coming back, I hopped back on my bike and continued down Ruby toward home. That was my introduction to Bobby Larson and the twelfth street boys.

Over the years our friendship grew. We played ball together on various teams. Bobby was always the better athlete. We discovered jazz together. We joined the service at the same time. Bobby joined the Coast Guard and I opted for the Navy. After our years in the service we both switched box cars for the Union Pacific and cashed our paychecks at Rich’s Bar. We watched JFK get elected and never gave a thought to growing old. We were “Bottoms Boys.” The rules of life didn’t apply to us. Then and I took a road trip to Denver and Bobby met a girl.

Bobby and Marilyn were married for over fifty years. They raised a family and were everything that is good about this country. I decided to stay in Denver and enrolled at DU. Over the years, we would see each other from time to time at the occasional high school reunion or when I was in KC on business. I would also call, usually when I was drunk and at a bar I knew he would recognize. “Hey Bobby, I’m at Tootsie’s in Nashville and just wrote your number on the wall by this payphone I’m calling you from!”

I know he lived vicariously through my adventures and travels; he told me as much. But I still dream from time to time about what might have been had I stayed at home. One thing’s for certain. Dreaming or awake, I remember Bobby.